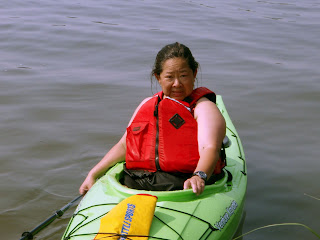 Aht came to class determined to learn a wet exit and how to stop her boat so she wouldn't crash into things. She quickly gained those skills and moved on to turning strokes, draw strokes and kayak tag.

We got a leisurely start yesterday. Robert cooked us a hearty breakfast of hash browns, pancakes and vegetarian sausage (with help on the pancakes from Jeremy) and we finalized our class plans. By 11 a.m., Robert, Dan (who is working for him), Alec and Sharon were out on the water practicing some ideas for teaching the rolling class. Sharon and Hannah also mapped out the women on the water class, which is essentially a two-star training with a heavy infusion of games and an accommodation to some of the issues and competencies particular to women. (More on that later.)
At 1 p.m., the launch area was awash in boats and students. There was a palpable sense of excitement and a little bit of nervousness. Beginners, in particular, often feel a combination of eager anticipation and fear. They're attracted to kayaking—that's why they're taking a class--but they're not sure what's expected or how well they'll do, and some of them are worried about everything from looking foolish to drowning.
A little fear is a good thing. We want people to take seriously the risks associated with paddling. Too much fear, however, is stifling. In nearly every class, there's at least one student whose fears prevent him or her from taking on the challenges that build skills. Often, the “wet exit” is the first obstacle. This is maneuver used for getting out of a capsized kayak. We teach it methodically: when you're upside down, slap the sides of your boat three times, then bring them to your cockpit coaming; slide your hands forward, push the grab loop on your spray skirt forward, then pull it back to release the skirt; loosen the skirt all the way back, then place your hands about hip-position on your coaming; push with your arms and come out of the cockpit as though you're taking off a pair of pants; hold on to your boat and your paddle.
The truth is, most students are able to do a wet exit with little or no instruction. They may not slap the side of the boat. They'll probably lose the paddle. It definitely won't be pretty. But they won't drown. Once they know they can wet exit, they're ready to learn to do it with less panic and loss of equipment. And once they're over the fear of capsize, they're willing to take on other risks that allow them to build their skills as paddlers.
Too little fear, by contrast, is dangerous. A student with too much machismo is an annoyance in a class and worse, a danger to himself.
I'll take a fearful beginner over an overconfident one any time. Fear can be overcome with patient instruction. With confidence comes competence, and with competence more well-earned confidence. It's a pleasure to be a part of that process. 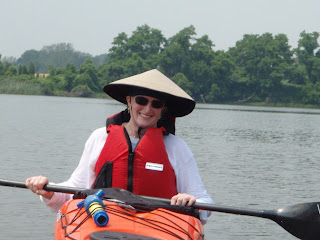 Nancy has the kind of attitude that enables her to gain skills swiftly
and have fun no matter what she's doing. 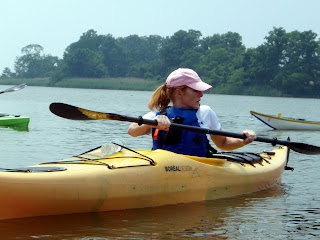 Carol wasn't sure she wanted to paddle at all.
She turned out to have genuine talent and a can-do attitude.
(Photos on this post courtesy of Chiara, one of the delightful women in the "women on the water" class.)
Posted by bpfamily at 7:40 PM