Why a women's class? 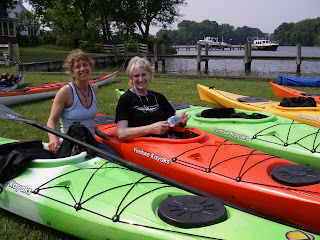 Most classes begin with individual boat fit so that students feel comfortable in their kayaks and can control them well.

Saturday's “women on the water” class was, in many ways, typical of other all-female classes I've taken and taught. The participants ranged from timid to almost fearless, from novice to intermediate, from goal-oriented to open-to-anything. But what they all had in common was this: They wanted to learn in a supportive environment where nobody would judge them, and that's what an all-women's class meant to them.
It's funny, when you think about. Are women any less judgmental than men? Not necessarily. But they often are more supportive of one another, particularly when they are overcoming their fears and gaining new skills. In a mixed gender class, you're less likely to see a spontaneous round of applause after someone screws up her confidence and finally attempts a scoop rescue on a fellow paddler. You're more likely to see a someone hanging back and watching instead of trying new skills. But in a women-only class, there's a lot of encouragement and positive reinforcement. Students root for each other and celebrate each other's accomplishments. It's a case of gender camaraderie at its best.
Our Saturday class began with two students refusing to do a “wet exit.” One saw no need; the other was afraid. Sizing up the conditions (warm water and air, calm seas, no spray skirts), I hastily devised the “modified wet exit,” in which I would hold the student's hands while she flipped her boat and came out. Both students agreed to do this and executed it easily, proving to themselves and to me that they would come out of their boats if they accidentally capsized.
By contrast, one student came to class with the wet exit high on her list of desired skills. She had never done one and was a little afraid she wouldn't be able to. After she pulled one off, she was ecstatic, and kept doing it over and over just to reinforce the skill. Her pride was infectious; the excitement of the whole class ratcheted up several notches.
The rest of the class entailed a mix of teaching and playing, with the games reinforcing the skills. For example, after teaching turning strokes and draw strokes, we played kayak basketball, in which students attempted to toss tennis balls into each other's cockpits. When they missed their targets, they had to retrieve the balls from the water by using the strokes they had learned. The beauty of doing this through games is that the stroke practice happens naturally. The students laugh and focus on what they're trying to accomplish. The paddle skills are no longer an end, but a means to an end, which means they're actually useful.
There was a time when I would have been skeptical about the need for all-women's classes. I grew up with only brothers and always had male friends. My husband is my favorite paddling partner. And yet, when I was first learning to kayak, I took a few women's classes and appreciated how comfortable I felt making mistakes and learning in an all-female environment. Now I watch my students gravitating toward that same kind of supportive, encouraging community and benefiting from the camaraderie it creates, and I'm sold on providing this option for women. 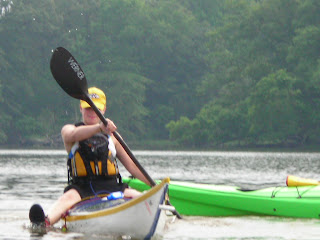 One of the best ways to get comfortable with a kayak is to play in it.
Posted by bpfamily at 7:44 AM

What a wonderful post. As an instructor, I much prefer to teach women for many of the reasons you have described. They seem to be less ego oriented and don't have their entire self esteem tied up with missing some technique. I also find that I can gently work them through their fears while men are more likely to "go for it" whether or not they are ready mentally. Thanks.

Hey--I remember you! You joined us for day three of the ICE with Sam Crowley. Thanks for commenting!