The outdoor paddling season is far from over. We'll still be on the lake for another month or so (and, we hope, the annual New Year's Day paddle on the Chicago River). But the indoor paddling season has begun. It's a delightful period of overlap, when we can paddle in water that's 70 degrees one day and 50 degrees the next. 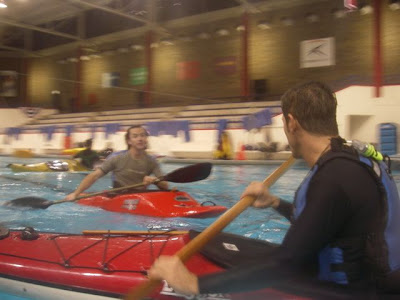 Dave Olson (left) visits with paddlers at the UIC open pool session.
Wednesday nights are open pool sessions at the University of Illinois at Chicago, thanks to Dave Olson of Kayak Chicago. Dave rents the pool for 40+ weeks and welcomes paddlers to pay by the night or by the season to use it. He also rents boats for those who arrange it in advance, and he offers lessons.
We mainly come to work on skills and enjoy weekly time on the water in the dead of winter. This past Wednesday was the first pool session of 2008/09, and most people just seemed happy to see one another again. 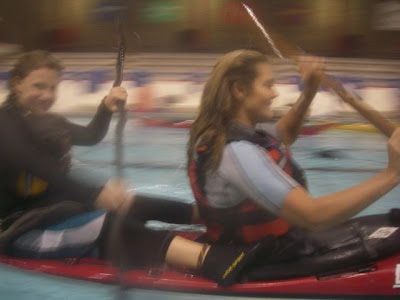 Wendy Madgwick and Hannah turn a single into a double.

Alec demonstrates a C-to-C roll.
Posted by bpfamily at 1:49 PM No comments: 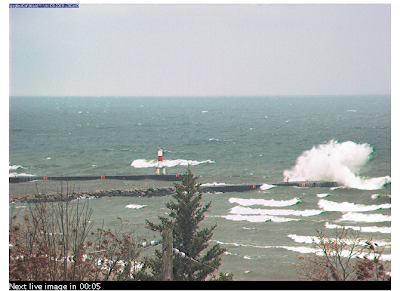 Can't say we feel really sorry to miss out on that!
Posted by bpfamily at 2:09 PM 4 comments:

The hard decision not to paddle

We were supposed to paddle on the east side of the lake today with Keith Wikle, Doug Van Doren and Lori Stegmeier--kayaking friends we mostly see during the summer at various midwestern symposia.
But the weather had other plans. Over the past few days, we watched as the forecast grew increasingly unfriendly. Winds of up to 30 knots. Waves of 5 to 8 feet building to 8 to 12. Air temperatures in the lower 40s. Rain. Snow. Sleet. 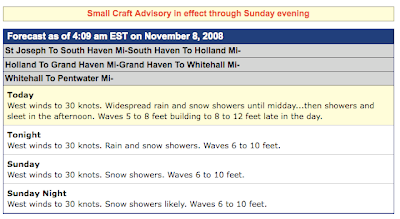 The marine forecast this morning. 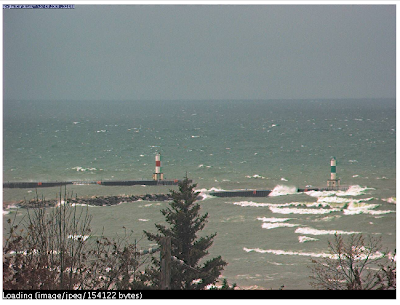 Webcam above the pier at South Haven at 10 this morning.
Keith says waves that go above the pier are 8 footers.
It's hard to decide not to paddle, especially when we've set aside the time and made arrangements with people we'd really like to see.
We're pretty sure Keith will hit the waves in his surf boat. We'll be thinking about him today and checking his blog tomorrow.
Posted by bpfamily at 8:49 AM 2 comments: 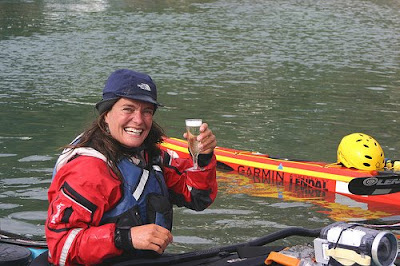 Justine Curgenven. (Photo courtesy of Justine Curgenven.)
Over the course of two evenings, we watched This is the Sea 4. This is a generous package: one disk of shorter profiles of remarkable paddlers and locales; one disk with two longer expeditions.
Disk one follows Justine's now-familiar approach of documenting outstanding kayakers who collectively define the sport. But whereas This is the Sea 1, 2 and 3 were like a kayaking Who's Who and Where's Where , This is the Sea 4 widens the lens to explore the variation and diversity of what can be done with sea kayaks themselves. We meet kayak fishermen off the California coast, whitewater paddlers tackling the Ottawa River in sea kayaks, and a Norwegian father-and-son team who hop around on the tops of their boats in the fjords. We also meet a woman who nurses injured wombats back to health, and see Hadas Feldman on her home turf. The message of disk one is something like, "All over the world, people are pushing the bounds of what they and their boats can do. Don't be narrow-minded about what sea kayaking is about."
Disk two contains two expedition narratives that, like her earlier ones, show why sea kayak trips are so enticing but don't disguise how hard they can be. The Haida Gwaii (Queen Charlotte Islands) circumnavigation with Shawna Franklin and Leon Somme manages to be a loving portrait of a remarkable place, a profile of the whimsical and knowledgeable owners of Body Boat Blade, and a story all in one. (Those of us who met Shawna and Leon at the West Michigan Coastal Kayakers Association symposium last year got a preview of this trip.) 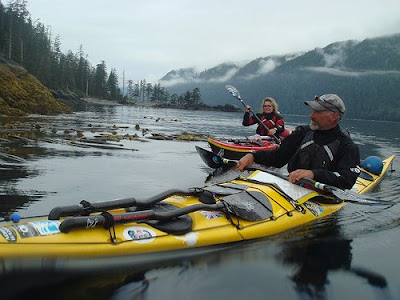 Shawna Franklin and Leon Somme. (Photo by Justine Curgenven.)
The circumnavigation of the south island of New Zealand with Barry Shaw is considerably more challenging. The two paddled 2,400 kilometers, many of them into stiff headwinds, with limited landing options that were further complicated by punishing surf. At one point, Justine develops an infection and has to be airlifted to a hospital. They often look exhausted and sometimes almost defeated, and share all of that in the footage. At some points, Justine is even too tired to laugh. It's really a brutally honest documentary; she shares the tough decisions, the discouragement and the fear as well as the elation and excitement. That's something we've always appreciated about Justine's work, and it's very much in evidence here. 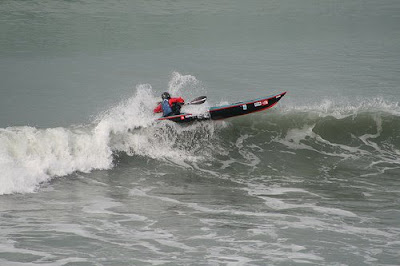 We've found, over the years, that we return to each of the This is the Sea DVDs to review segments we love. The same will be true with this one.
Justine and Barry will be showing a one-hour condensed version of This is the Sea 4 and talking about their circumnavigation on Friday, November 14 in St. Charles, IL. Admission is $10, half of which goes to support Chicago Adventure Therapy. There will be an after-party nearby. For tickets or more information, visit Geneva Kayak Center or call 630.232.0320.
Posted by bpfamily at 6:57 PM No comments:

Email ThisBlogThis!Share to TwitterShare to FacebookShare to Pinterest
Labels: Chicago Adventure Therapy, Geneva Kayak Center, This is the Sea 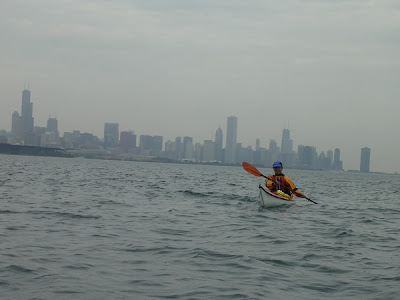 This is the Lake.
We got home too late Sunday night to watch disk two, and now we're swept up in election-day mania. We'll write our review tomorrow and post it promptly....promise!
So don't sit there reading blog postings. Vote!
Posted by bpfamily at 9:00 AM No comments:

Night at the movies 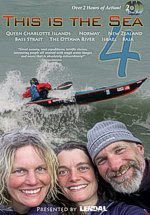 We watched disk one last night and will watch disk two tonight after the Chicago Whitewater Association pool session, so if you were hoping to hear what we think, check back tomorrow. Meanwhile, call Geneva Kayak Center at 630.232.0320 to reserve your tickets to her Nov. 14 midwest premiere.
How's that for restraint?
Posted by bpfamily at 12:53 PM No comments:

Email ThisBlogThis!Share to TwitterShare to FacebookShare to Pinterest
Labels: Geneva Kayak Center, This is the Sea

Do lakes get lonely? 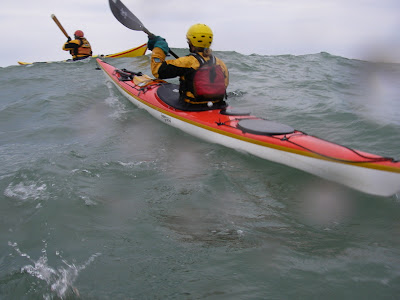 We gently paddle the surface of the lake, leaving no trace behind.

As soon as we unloaded out boats near the 59th Street Harbor this morning, we could tell how dramatically the season has changed. The sun angled low through the crisp fall leaves still clinging to twigs overhead; the algae that made the ramp slippery during the summer was gone; fishermen were casting from the barren piers in the outer harbor; there was only one boat left in the inner harbor, and it looked forlorn. We paddled out in the middle of the channel with no concern for traffic because there were no boats in sight.
The wind was about 10 knots out of the northeast, causing waves mostly in the two- to four-foot range, which collided with one another and built a little higher off the breakwater that protects 63rd Street Beach. The surface water temperature is in the mid to upper 50s now--poagie weather.
We didn't have a lot of time, so we paddled south toward Rainbow Beach, enjoying the crashing of waves hitting the boulders along the shore, and then back north to 63rd Street Beach, where we caught a few nice rides on fairly gentle surf. We saw three boats in the distance headed for dry dock, and interrupted a gaggle of geese floating near the harbor mouth.
Lake Michigan must get lonely in the autumn. Perhaps that's why she thrashes her shores in the fall before subsiding under a blanket of ice in the winter. Either that or she revels in her solitude after a summer of assaults by jet skis, motor boats, tour boats and yachts. We like to think she enjoys our company, at least, as we gently paddle her surface, leaving no trace behind.
Posted by bpfamily at 4:20 PM 1 comment: