Hiking with the mosquitoes 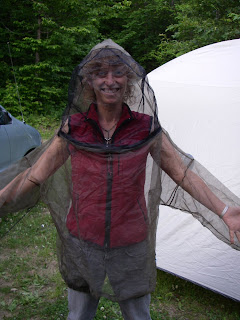 A bug shirt helps, but the mosquitoes and black flies are smarter than we are and figure out how to bite us despite all our defenses.
The five-day whitewater kayaking program began today. With thunder rumbling in the distance and the skies darkening by the moment, Claudia (the owner) and the week's instructors introduced themselves and gave an overview of the week ahead. We watched the students—some excited, some nervous, some both—and thought about what the instructors chose to emphasize about themselves and their priorities. Enthusiasm goes over well. It's kind of contagious.
After the kids were settled, we drove to Algonquin Provincial Park, where we went for a 10-kilometer hike on a steep trail that turned out to be a stream in places. It was perhaps the buggiest hike we've ever taken; swarms of mosquitoes hovered around us as we negotiated the mud, rocks and fallen branches. Any surface that wasn't under water was slippery. This might be the first time that a hike classified as “difficult” actually was, though it wasn't for the reasons the park administrators had in mind.
We earned some spectacular views of the park as well as some awe-inspiring smaller features: beaver dams, wildflowers and mysterious insect colonies. 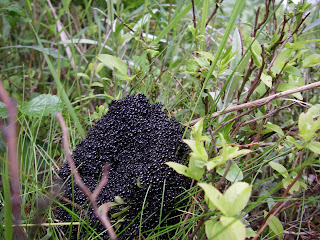 They're little, black and in motion: Anybody know what these are? 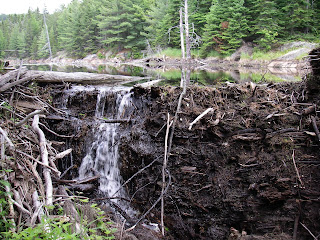 Some enterprising beavers created a lake out of a river. 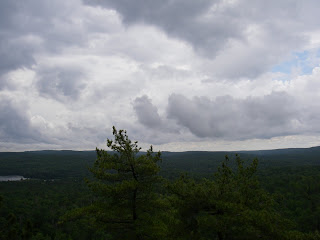 Our reward for hiking despite rain, bugs and occasional thunder: spectacular views and dramatic skies.
Posted by bpfamily at 10:24 AM