Marooned by a combination of a healing arm (Sharon) and a malingering cold (Alec), we haven't been able to paddle lately. That hasn't kept us from reading about the waves we're missing, however. In fact, we're absorbed in two books by pioneering oceanographer Willard Bascom, who died in 2000 at the age of 83.
Waves and Beaches: The Dynamics of the Ocean Surface was first published in 1964 as part of the Science Study Series of "up-to-date, authoritative, and readable science books" by the Physical Science Study Committee of Educational Services Incorporated. 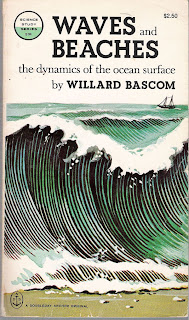 Bascom's scholarly surf credentials are extensive. He began his career as an oceanographic engineer in 1945, when he joined the World War II Waves Project of the University of California at Berkeley. The initial goal of the project was to analyze the underwater shapes of beaches to understand how aerial images could help the military predict surf. Later, the project continued for scientific purposes. Bascom's day-to-day work involved going out in huge, breaking waves in a "dukw" (amphibious truck) and taking depth measurements with a lead weight on a line, then correlating those readings with wave heights measured by markers and transits.

Bascom, who had previously worked in mines and tunnels, had never before seen the Pacific Ocean. "Somehow, in innocence and ignorance, I was persuaded that fifteen-foot breakers smashing down on a thirty-two-foot tin boat were nothing to be disturbed about," he writes. "In reality, of course, we underestimated the height and unexpectedly encountered breakers over twenty feet high." The local Coast Guard considered these conditions unsuitable for anything other than emergency rescues. "But they had the advantage of appreciating the risk," he notes dryly.

His literal immersion in the science of surf was the start of a remarkable career in oceanography. He went on to direct the Mohole Project for the National Academy of Science and become president of Ocean Science and Engineering, Inc. And fortunately for us, he wrote this amazing book (among others).

Waves and Beaches begins with chapters on wave theory and properties. He covers sea waves, storm waves, shallow-water waves and the longest waves of all: tides. In the process, he explains the physics of waves--why they break when they do, how their speed and force relate to their height and frequency--and how they are affected by shoreline and underwater features.

If you don't get hung up on the complicated calculations and instead read his explanations, you'll find this book surprising accessible and, at times, surprising. Bascom disputes the existence of "undertow," for example (though he takes rip tides very seriously and explains why they occur and how to survive if you're caught in one).

His explanations of surf are fabulous:

"As a wave crest moves into water whose depth is about twice the wave height....the crest 'peaks up.' That is, the rounded crest that is identified with swell is transformed into a higher, more pointed mass of water with steeper flanks. As the depth of the water continues to decrease, the circular orbits [of the water particles] are squeezed into a tilted ellipse and the orbital velocity at the crest increases with the increasing wave height....when not enough water is available in the shallow water ahead to fill in the crest and complete a symmetrical wave form, the top of the onrushing crest becomes unsupported and it collapses, falling in uncompleted orbits. The wave has broken; it is surf."

Reading this book, it's hard to believe it was written more than 50 years ago. It feels remarkably contemporary, both in its science and in its spirit.

We'll write about the other book, The Crest of the Wave: Adventures in Oceanography, Bascom's autobiography, in a future post.

I agree. The book seems very modern despite how old it is. It's well worth the read and a buy.

Great book review!
I have a copy of the 1980 edition, which had a cover price of $9.95
This is a must-read for anyone wishing to understand the phenomena of lumpy water. Besides the educational aspect of the book, the accounts of dukw surfing are the icing on the cake!
Erik S