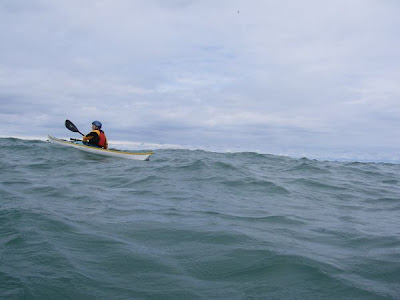 North winds at last! The forecast was 3- to 5-foot waves, so we hastened to the lake. This time we wore drysuits, only to find that some of the surface water had returned and the water was relative balmy--somewhere in the mid-60s.
We love practicing rescues, but don't often have an opportunity to try them in the conditions in which we're most likely to need them. (Especially this year, when we've had very few big wave days.) So we took turns putting each other and ourselves back in our boats. 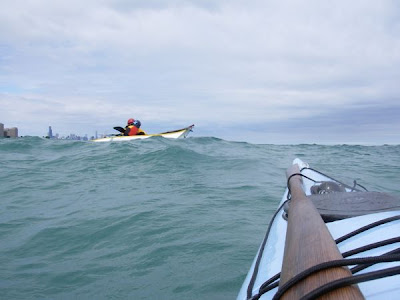 Alec and Hannah complete a t-rescue. 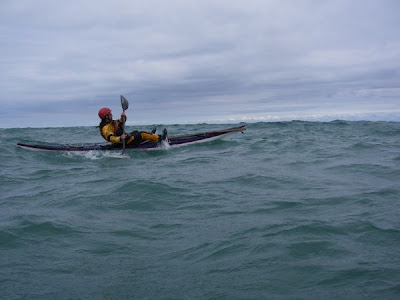 Every time we do this, we are struck by how well these rescues work in conditions, but how essential it is to move quickly and hold on to everything (boats, paddles, people). We typically teach rescues in calm conditions in which paddlers are unlikely to capsize and try to convince our students that in real conditions, any lapse of attention can lead to serious complications. If the rescuer lets go of the casualty's boat, it can whip away in the wind. If the casualty lets go of his or her boat or the rescuer's deck lines, they can quickly be separated. If anybody lets go of a paddle, they may never see it again. Working on rescues in real conditions is the best test of your technique.