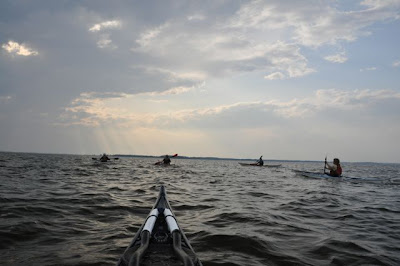 The day before we were scheduled to teach a leadership and rescues class at Adventure Crafters, during which we planned to teach towing techniques, we went for a social paddle with co-owner and instructor-in-chief Robert Schrack. We were talking about classes we've taught and tours we've led when Robert introduced us to a term we didn't realize we had been lacking: the "psychological tow."
If you're an instructor or guide, or simply a skilled paddler who has taken less experienced people out on the water, you'll immediately know what this means. Frequently, somebody becomes overwhelmed by conditions. They may be freaked out by waves or wind, or simply tired out by too much exertion, and they need some help to complete the planned journey.
You could tow them, which would be more work for you and might be humiliating for them. But in the case of bumpy water, that might make things worse. So instead, you coach them. "Keep going," you say. "Keep your hips loose. That's great. Keep paddling. Nice work. It'll be easier if you get your entire blade in the water."
You instruct them a bit, encourage them a lot, and distract them. "You know, the bar lakes along this shoreline were once small bays...." You blather on, paddling close to them and sounding relaxed, offering a mix of small talk and advice, and they manage to make it on their own.
That's the psychological tow. Having a term for it is not only satisfying, in the same way as knowing the names of birds or mushrooms. It's practical. By placing the psychological tow in the category of tows, it reminds us to try this first before a more invasive intervention.
Thanks, Robert!
Posted by bpfamily at 6:48 PM

my wife an I signed up for the lessons at Adventure Crafter's and learner so much. the Psychological tow really retains to all lessons learned. my wife is visually impaired so to get her to paddle out in the bay is quite a task. with Alex, Robert and the girls guidance she was so pumped she got her own kayak.
the mind is a powerful rope