Yesterday, we met our friend Keith Wikle at Portage, Ind. for a paddle along a portion of Indiana's notorious heavy industrial shoreline. The air was below 20 degrees and the winds were forecast to remain 15 to 20 knots out of the southwest, so we dressed and planned accordingly. Our kit reflected a sense of caution.

Nonetheless, we questioned how long we'd stay on the lake. We felt the cold through our drysuits and thermal layers, and it was nearly impossible to keep our toes warm.

After assessing the risks and doing a calorie-to-fun calculation--a mode of decision-making we learned from Scott Fairty of Geneva Kayak Center--we got on the water and paddled out onto the lake. As soon as we were moving, we kept warm. The winds were more or less at our backs, so we planned to turn around less than half way through our four or so hours of time on the water. The rocky breakwall was just beginning to ice over for the winter.

We reached the power plant just west of the Indiana Dunes National Lakeshore, where the warm water outflow raised the temperature of the nearshore water from the high 30s to what felt like about 70 degrees. Steam rose eerily from the surface.

A few wave sets rolled in, allowing us a rare warm-water surfing opportunity on an otherwise cold day and lake.

We turned around here, expecting a longer trip back to Portage. The winds had picked up, gusting now to 26 knots. Although the air temperature was at its peak -- about 23 degrees -- the wind chill was about 10 degrees, and we felt it. Our gear began to ice up. Our spare paddle blades, short tow and deck lines, and spray skirts were coated with ice. Icicles hung from our hat brims; ice clumps dotted our drysuits. Things that were formerly pliable became stiff. We were confident in these conditions, but we talked about how hard it would be to execute an efficient rescue with our slippery boats, chilly fingers and ice-encrusted safety gear.

The final stretch was less than pleasant. The wind had picked up; the sun was lower on the horizon; the wind chill made it feel as though the temperature had dropped. We were determined to get off the water before dark, and we knew we would feel even colder if we stopped paddling hard.

Over dinner, we reflected on our day. We were glad we went out. The lake was beautiful. We had assessed the risks and planned accordingly, allowing us to push our limits without getting into trouble. But we decided this was as cold as it would be safe for us to paddle. Between the hazard of hypothermia and the  difficulty of doing otherwise simple rescues, even benign conditions are potentially hazardous when the weather gets this cold. 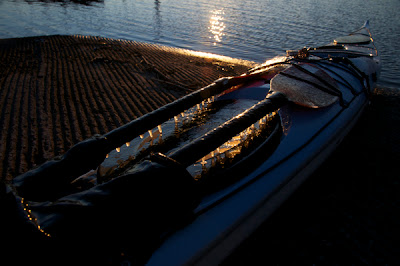 I love winter paddling, but once the temps start to reach 15F or below, gear just freezes up too quickly. Having anything on deck is worthless because it freezes and the bungee cords stop working. I have found that using a neoprene Tuilik over a drysuit in winter makes everything much warmer.

I just love paddling past frozen shorelines, and I expect to make it out every month this year -- something that I've done for over four years now. That's not easy to do in northern MN, but Lake Superior stay open almost all year long.

I'm glad you got out!

So, it was almost miserably cold. Does that mean that Keith actually wore gloves?

@Bryan: Yes, everything that was supposed to stretch or bend became rigid. Getting spare paddles out from under bungees was a chore, too!

@John: First pogies, then gloves. And his hands were still freezing. We missed you, but I bet you didn't miss us!

It was great to get out. The surfing near the power plant outlet was surreal. I capsized in 70 degree water, and then everything froze. Including my hat.

Keith, I realized that it was getting really cold when the droplets from your paddle strokes, would partially freeze before hitting the water. It was something to see them float on top of the water a bit before unfreezing.
Still, it was a lot of fun to get out. I like the "Hansel" challenge of trying to get out each month. We will have to keep an eye on the ice.