The southern shore of Lake Michigan is a testament to what goes wrong when industry runs amok. Factories and refineries clog the shoreline and pollute the air and water. Several even reach right into the lake, creating artificial peninsulas of industrial byproducts bordered by steel break walls. Every now and then, a short stretch of sand dunes suggests what this area was like before the titans of industry took it over. It's depressing, but fascinating.

We began our heavy industrial paddle in Portage, Indiana, where a former acid pit was recently remediated and turned into a park, complete with a LEED-certified building. Bathers on the nearby beach frolicked against a background of smokestacks and power lines.

We paddled for a couple of miles past dunes and beach houses, already within view of the upcoming industrial corridor.

It wasn't long before we reached the first of several industrial compounds.


At that point, there was really no place to land--which was fine with us, because we wouldn't have wanted to. It was noisy and the air smelled foul.

At one point, we had to go around an enormous spit of reclaimed land where a steel company took over what had been part of the lake. For about six miles, we paddled along a steel break wall. Behind it, behemoth trucks dumped material and belched smoke that blew into the water and our faces. 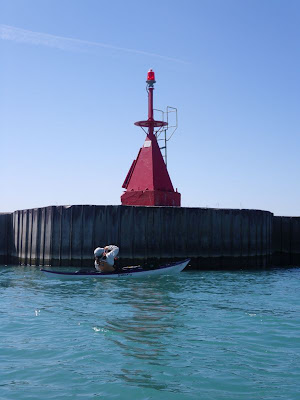 As the sun set, we crossed the border into Illinois... 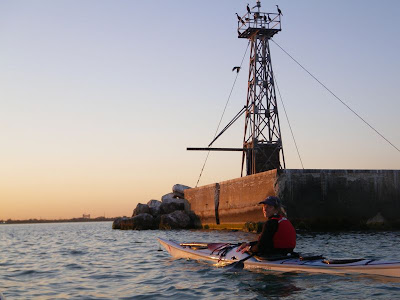 ...and landed at Calumet Park. 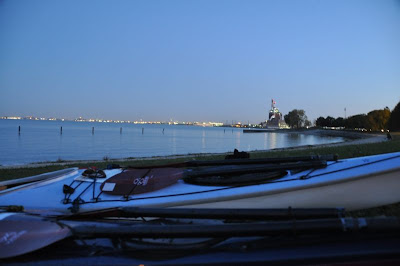 Most of the time, it's nice to paddle in places that are a little more pristine, or at least a little less polluted. But sometimes it's good to paddle in a place that reminds us that consumption has consequences.
Posted by bpfamily at 9:39 PM

Nice writeup, It's good to see rejuvenation. Even if they no longer pollute, or make anything, maybe it's better they stay to remind us of what we are capable of when we think there is a dollar to be made, sort of our version of the Pyramids of Giza, a monument of steel that is like the temple of Luxor visible from the nile.