Sharon paddles along a breakwall east of Navy Pier.

"You wouldn't want to go paddling today," a friend said in a message on our voice mail. "The wind is light and the water is flat."
We missed her message because we were out on the lake.
In fact, it was a lovely day. We could put in and take out anywhere we liked. We didn't even have to pay for parking at North Avenue Beach. We saw only two boats: a tour boat heading for dry dock and a Coast Guard boat zipping to shore. Most of the buoys were gone.
First we visited the four-mile crib, one of the city's water intake locations. It's a fortress-like structure with a Tim Burtonesque tower on top. The water was calm enough that Alec was able to bring out his non-waterproof camera. 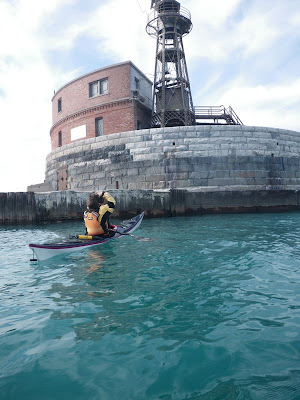 From there, we paddled down to 12th Street Beach. No sunbathers, no lifeguards, no seagulls. Just groups of elementary school students on field trips to the Museum Campus, who found us at least as interesting as the marine mammals in the Shedd Aquarium. We rounded out our paddle by visitng various lights and lighthouses along the breakwall east of Navy Pier. 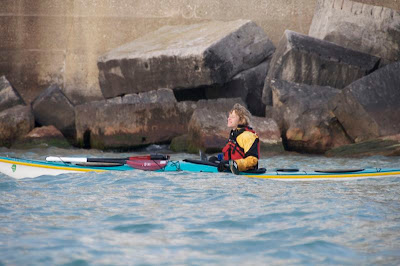 Sharon gives some scale to the boulders at the base of the lighthouse. 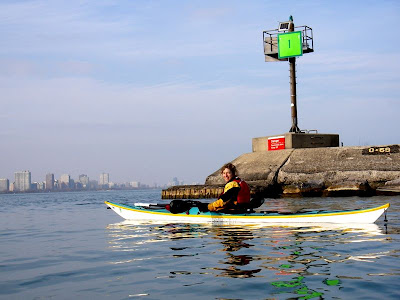 We paid our respects to light number 1.

By the time we returned to North Avenue Beach, the sun was getting lower (even though it was barely 3 p.m.) and the air was starting to cool. We landed on the empty beach, packed up in the abandoned parking lot, and returned to the chaos of rush hour traffic--two water creatures in a current of landlubbers. 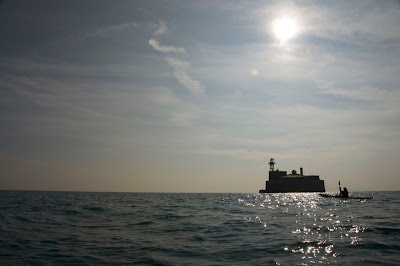 Great!! do you have more pictures of the cribs and lighthouse?