Doing battle with the gales of November

Today was National Cape Day, according to our son. Or perhaps it was. Regardless, Alec took the morning off to paddle with Scott in what promised to be conditions demanding near super powers, if not capes. 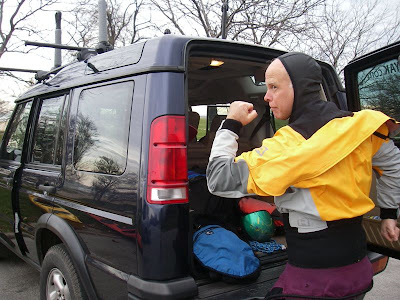 Not all superheroes wear capes. Some wear drysuits. Scott models.

The winds were out of the east-northeast at 25 knots, gusting to 28, and the waves were 5 to 7 feet and gnarly. An unusual current flowed from south to north along the beach at Montrose, perhaps the recirculating portion of the general north-to-south flow. 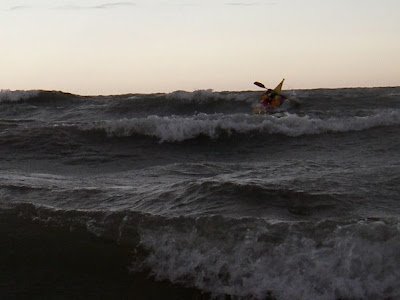 Scott punching out or surfing backwards...hard to tell which (and who remembers?).

Conditions like these can wear you out quickly. Before calling it quits, Alec and Scott paddled out to the end of the pier and looked south, where the full brunt of the wind was bouncing off the pier and the breakwall. There was clapatis as far as the eye could see. "If you paddled out there, you'd be on your own," Scott mused.

Scott explores the clapatis south of the pier.

Conditions can kick up quickly on the Great Lakes and subside just as fast. By tomorrow night, the winds will shift around to the southeast and the waves will subside to 1 to 3 feet. Even superheroes can't do anything about that.

Great photos. I was out walking along the lake around the same time, and actually got wet from the surf crashing over the rocks.