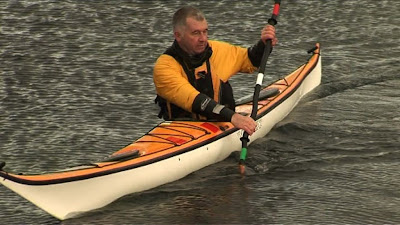 When Gordon Brown’s book, “Sea Kayak: A Manual for Intermediate and Advanced Sea Kayakers," came out in December 2006,  it was one of the few books not aimed at beginners. It was a survey of all the knowledge required of sea kayakers, infused with his personal points of view.

Some of those same idiosyncratic perspectives are in Simon Willis’ new video, “Sea Kayak with Gordon Brown,” produced by Sunart Media and distributed in North America by Heliconia Press.


This video uses a four-day journey along the west coast of the Scottish Isle of Skye as a frame for coaching sessions on sea kayak strokes. Gordon Brown’s companions include his wife, Morag, and five paddlers who range from beginner to low intermediate, along with the invisible cameraman and his “driver” who paddles from the back of his double. 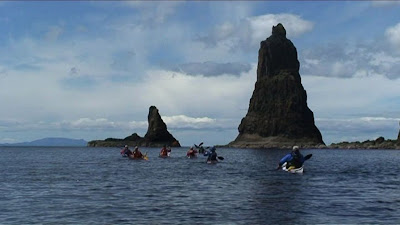 Gordon Brown and companions paddling along the west coast of the Isle of Skye.

The scenery is stunning, and one of his companions, John, provides a wealth of knowledge about local flora, fauna, history and geology. Punctuating the trip are the coaching sessions, in which Gordon Brown demonstrates boat fit, edging, strokes and techniques for the viewer, not his companions on the journey. He explains as he demonstrates, and Willis employs a creative set of camera angles to allow viewers to see exactly what Gordon Brown’s body, boat and blade are doing. (He even goes inside the cockpit during the boat fit session to show how Gordon Brown’s feet and knees contact the boat.)

Gordon Brown covers familiar basic strokes (forward stroke, forward and reverse sweep strokes, draw strokes) as well as more advanced maneuvers (bow rudder, cross-bow rudder,  stern rudder), in both calm and rough water. His demonstration of linked turning and draw strokes while rock gardening is gorgeous.  And his explanations are often unlike ones we’ve heard before. For example, he describes the forward sweep as a high brace position stroke and the reverse sweep as a low brace position stroke. He also suggests exercises for gaining comfort with some of the strokes, such as a beautiful demonstration of practicing eddyline turns with eyes closed. Each of the coaching sessions contains such a gem and makes this video well worth watching no matter what your paddling level. 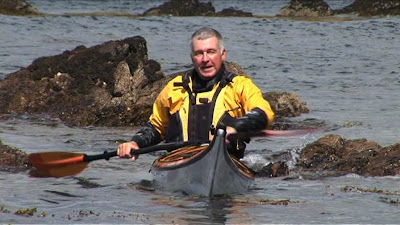 Beginners will find that this video won’t answer all their questions. For example, he explains edging and leaning without clarifying their roles in turning. We agree with his comment toward the end that the book is an ideal companion to the video. In fact, we feel that the book is stronger as a stand-alone source of information, while this video is an appealing sampler.

But every paddler will get something practical out of this video, in addition to an abiding affection for Gordon Brown, whose charm and sense of humor are palpable. After listening to him sing in the sea caves, you may be tempted to run out and buy a ticket to Scotland.

Here is the trailer to whet your appetite:

The DVD is available now directly from Sunart, and will soon be carried at Geneva Kayak Center and other well-stocked paddle centers.