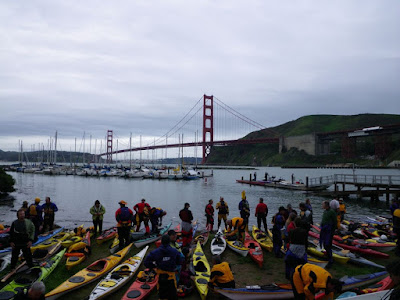 We just returned from the second annual Golden Gate Sea Kayak Symposium and we're still processing the experience and the photos. This was an unusual symposium for us because we attended as students, not as instructors. Alec took the BCU four-star training with Gordon Brown and Tom Burgh, while Sharon chose courses that would give her more experience paddling Pacific coast features like rock gardens and tidal races.
We've always loved Marin County, where the symposium was based. Just across the Golden Gate Bridge from San Francisco, the Marin Headlands were almost developed in the 1960s but saved by a lawsuit and protected instead as part of the Golden Gate National Recreation Area. Coaches and participants stayed at the Marin Headlands Hostel, a former US Army base now converted into a hostel and arts center, and classes were based in Horseshoe Cove near Sausalito. 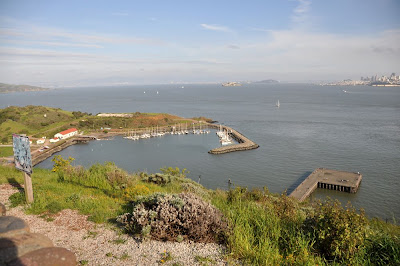 An aerial view of Horseshoe Cove.
We've visited this area more than a dozen times over the past two decades to hike the hills, explore the historic fortifications, and collect driftwood from the beaches. It's long been a favorite vacation destination, but we never paddled in the Pacific ocean or the San Francisco Bay. Until now. 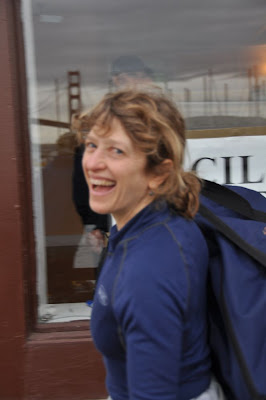 Sharon, gearing up for a day on the water.
The symposium featured an all-star cast of coaches from around the world. (Check the website for the complete list.) But we were also drawn by the opportunity to meet many of the excellent but lesser-known west coast coaches who were the backbone of this successful event. We weren't disappointed. 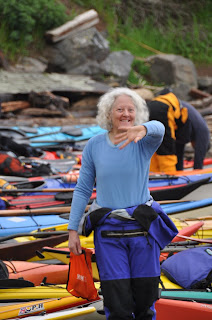 Cindy Scherrer isn't a lesser-known west coast coach, but she is one of our favorites.
Ironically, we also spent considerable time with midwestern coaches Kelly Blades (an old friend) and Mark Pecot (a new friend). How odd to go 2,000 miles to hang with your home team. 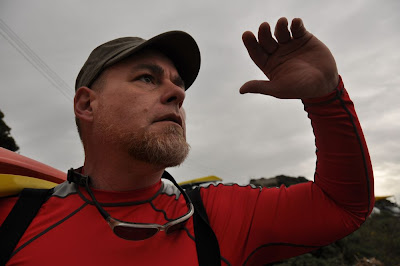 Kelly Blades, always on.
Check back tomorrow for more about the courses we took and the things we learned.
Posted by bpfamily at 9:31 PM