Fun and games (and some learning, too) 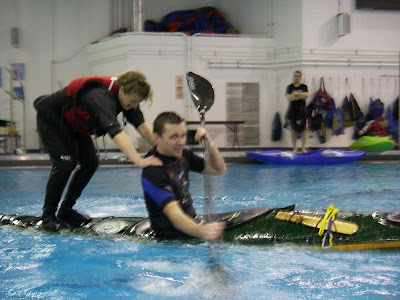 Hold on tight!
We meant to post some photos and videos a couple of weeks ago, but we were too busy playing games and nobody wanted to stop and take out a camera.
But this past week, we imposed some discipline on ourselves. During open pool sessions at three local pools -- Naperville North High School, UIC and the West Cook YMCA -- we filmed some games and other silliness.
The first video shows one of several games you can play using a tow rope. Sometimes we attach two boats stern to stern and have kayakers of similar ability paddle away from each other, trying to pull more than they are pulled. Variations on this include experimenting with different paddles (type and length) and attaching the boats bow to stern and having the paddlers compete forward stroke against reverse stroke.
Here, however, Tom is rolling while Alec has him under tow. This is a good way to work beyond the "pool-proof roll" because it simulates rolling while in motion or in current.

The next video shows one of many games that help develop boat control. Here, three paddlers raft up at one end of the pool. The first paddler draws sideways while the second paddler holds on. The third paddler pulls out and around to assume the first position and the rafted tow continues. Whoever is left outside of the raft at the opposite end of the pool is "out." (We suspect this would be even more fun with more paddlers in the raft.)

Games like this evolve out of a "what it..." suggestion, typically followed by an "I know! I know!" What if we raced sideways? I know! I know! What if, while racing sideways, the first person tows the second....?
There are many variations on each of these games. The goal is to have fun while working on skills.
We'll try to post more as we collect videos, assuming we aren't having too much fun playing. 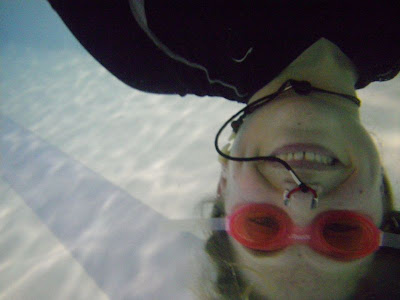 Great ideas! Thanks for sharing!