A wind that commands respect 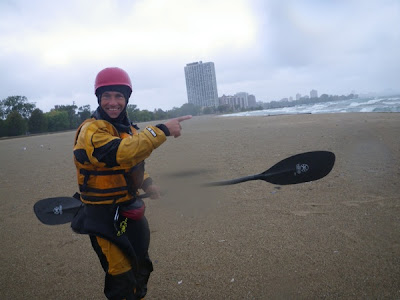 Yesterday, we planned to paddle the Calumet channel with legendary local paddler Erik Sprenne. The "legendary" part of his name comes from his 25-plus years as a whitewater instructor and river access advocate for the Chicago Whitewater Association. (Never mind that he lives in Indiana.)
We've long wanted to check out the Calumet, and we figured Erik was just the guy to show us the way. At the last minute, relative newcomer Aaron Litchfield joined us, too
Friday arrived with 25-plus-knot winds out of the north, steady rain and 5- to 7-foot waves. We met at Rainbow Beach on Chicago's South Side, still intending to paddle down to the channel. We assessed the waves from the beach, where they didn't look too intimidating, and launched into the surf and the wind.
The unrelenting waves and wind made progress difficult and communication nearly impossible, so we fought our way through the breaking waves and tucked in behind the water filtration plant breakwall to assess our options. This was no day for inland paddling, we decided. This was a day to be out on the lake. 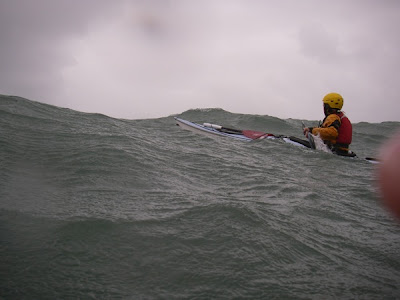 We decided to head out to the water intake crib--a crossing that would take less than 45 minutes on a calm day. The rain pelted our faces and the wind howled in our ears. The waves were steep and came in quick succession. 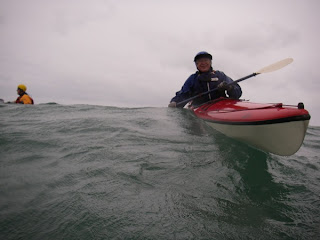 Erik enjoying the bumpy ride (above) and Aaron at ease in rough seas (below). 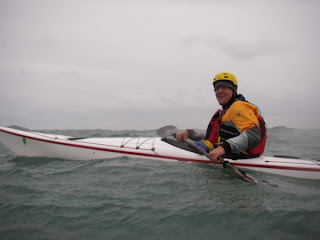 It was a slog, but a fun challenge. As we paddled out, I (Sharon) thought about Paul Redzimski and Mike Agostinelli's ill-fated Lake Michigan crossing in 2006. They found themselves in conditions a little bit gnarlier than these when they were just three miles from their destination on this side of the lake and had to be rescued--but they had to deal with those conditions in the dark, with colder water, after 47 miles of paddling, and with one boat taking on water. And it occurred to me: That was exactly three years ago. 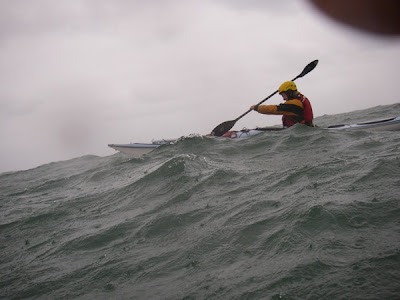 The rain pelted our faces as we padded into the wind.

After 90 minutes, we still hadn't reached the crib. The rain hadn't stopped. The wind was intensifying. The waves were building. But perhaps most importantly, we were getting hungry. That might have been more of an excuse than a reason, but we decided to begin the return trip. 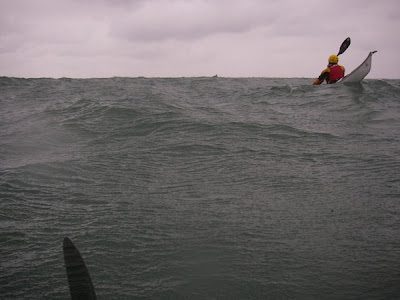 Up and over. When you see photos like these, don't forget that somebody had to stop paddling to take them. Thanks, Alec.

We flew back to the beach, dragged the boats onto the shore and hid behind the beach house to eat some lunch. We looked over to see that the water flowing down toa ledge from a puddle in the parking lot was being propelled back up by the wind. When we lifted our boats onto our racks, they nearly blew back down. This was a wind that commanded respect. 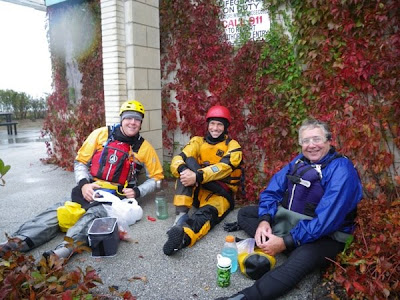 We decided to let the wind do its thing in peace. As we drove away, we appreciated the simple things in life: the heating in the car, the tea in our thermoses, and the luxury of being able to go out on an otherwise miserable day and have a great time on the water. 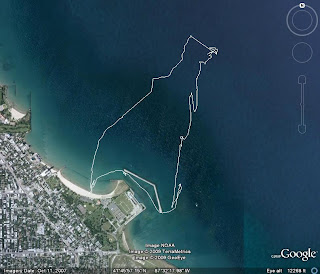 (Note that the water intake crib is missing from Google Earth.)

That is a beautiful photo of Sharon dropping over the wave.

Hi Sharon, Paul here...Yes, I thought about our crossing that same day as well, and it's hard to believe that it was 3 years ago. Columbus Day is probably not the best time to cross the lake, but it was certainly an experience I will never forget.