Here's something we have in common with salmon: We've been in all kinds of wonderful water, but every year we return to the tiny little pool where our love for paddling hatched.
OK, we stretched that metaphor to death. But how else can you explain our affection for the dinky little pool where the Chicago Whitewater Association (CWA) teaches 10-week classes every winter and spring?
We began as students about seven years ago. That's where we learned to roll and to control our boats. We gradually became assistants, helping set up gates and move gear. Now we're able to teach rolling and strokes to a new cohort of kayak enthusiasts and help on the club's teaching trips every spring on the DuPage, Vermillion and Wolf Rivers.
Last night was the final spring pool class in Oak Park--the night of the slalom, in which students are challenged to run through a series of gates, sometimes forward and sometimes backwards, as a test of their new-found paddling skills. 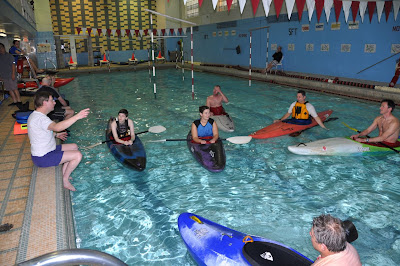 John Karch explains the slalom rules: Run all the gates once--some forwards, some backwards-- and do a roll or a 360-degree spin at the end before repeating the course once more. Each time you hit a gate, five seconds are added to your time.

People get very nervous, but they're also very supportive of one another. There's a lot of cheering when someone clears a gate, and groaning when they tap one with their boat or paddle. 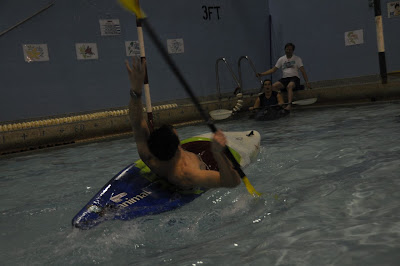 After the instructors run the course, we take down the gates, haul out the boats and go out for pizza. We'll see one another again in a few weeks, when we embark on the first of the river trips. 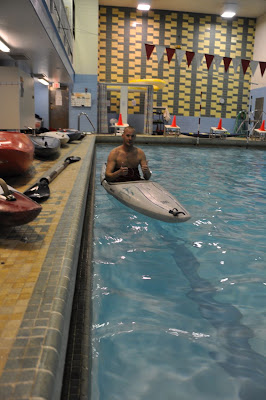 What an absolutely charming way to put it. Thank you!

A Big Apple paddler! Nice to meet you, Bonnie.