Close encounters of the encouraging kind 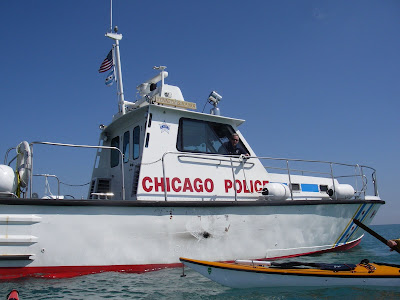 When you kayak on Lake Michigan, the rules of the road don't count for much. The law of tonnage trumps all. Big boats have the right of way, and little boats stay out of the way.
And yet, we have our friends. The other day, we were paddling near Burnham Harbor, scouting launch sites for the upcoming Burnham to Marquette Sea Kayak Expedition and enjoying pretty much having the lake to ourselves, when we noticed a large white powerboat slowly heading right for us. Soon we realized it was a Chicago Police Department boat, and its captain wanted to talk to us. So we paddled toward it.
If you haven't yet had the pleasure of talking with any of the police officers in the CPD Marine and Helicopter Unit, you might not know that these guys are among the friendliest, most helpful cops in the city. They tend to be long-time mariners with a healthy love and respect for Lake Michigan and a serious dedication to keeping people safe on the water.
The captain, Roger, immediately recognized that we were capable of taking care of ourselves, so we chatted awhile. "I have to confess, 10 years ago I thought you kayakers were crazy going out here in those little boats," he said. "But now I'm thinking about buying one and joining you." So we gave him some local paddling resources, told him we'd be happy to kayak with him, and went our separate ways.
We've had several similarly positive enounters over the years with the police and Coast Guard. These guys see plenty of drunk powerboaters and oblivious jet skiers. We think they're relieved when they see knowledgable sailors and kayakers who clearly know what they're doing and how to keep from getting in trouble. That's a reputation we want to make sure that our paddling community upholds.
Consider, for a moment, the trouble that one novice kayaker caused the entire community when he went over a dam on the Fox River. That incident led to pending legislation to create 350-foot "exclusion zones" upstream and downstream of dams, eliminating portages and effectively making those rivers unpaddlable. (For more information, visit the Illinois Paddling Council.)
We have access issues on the lake, too. There is a limited number of put-in and take-out sites on the Chicago shoreline between Memorial Day and Labor Day. There can be heavy boat traffic on the lake and on the Chicago River on warm summer days. Because we are small and human-powered, we rely on good relationships with the authorities when we want to go through the lock between the lake and the river or organize an event like the upcoming Burnham to Marquette expedition.
We need to cultivate and maintain these relationships by being responsible and responsive. That's why we value encounters like the one with Roger and look forward to seeing him in a much smaller boat some day.
Posted by bpfamily at 8:58 PM