Training with Ronnie and Marsha

During our three-month blogging hiatus, we didn’t hang up the paddles and mothball the kayaks. We were teaching for the Chicago Whitewater Association at the local YMCA, paddling on Wednesday nights in the huge UIC pool, and reading and thinking a lot about kayaking. But somehow, we didn’t feel compelled to write too much about it. There’s something about the indoor season that doesn’t lend itself to that sort of reflection.
All that should change now, at least for a few days. We arrived last night at Tybee Island, Georgia, with Lyn for four days of training with Ronnie Kemp and Marsha Henson of Sea Kayak Georgia. After our white-knuckle flight, we settled into the two-bedroom apartment attached to Marsha and Ronnie’s house, which is perfectly set up for paddlers. In addition to the basics (furnished kitchen, comfy beds, wi-fi), it has an outdoor shower for rinsing saltwater off gear, a bookshelf full of local guidebooks and paddling books and magazines, and a DVD cabinet full of paddling films. The brightly colored walls feature Marsha’s artwork, and the sun pours in through the large windows in the morning. It’s almost enough to make us want to sit around reading and listening to music, except that it’s blocks away from the water, and the reason we came is more compelling than the comfort indoors. We’re here to paddle.
It’s bitter cold here, at least by local standards: 26 degrees. That’s about 25 degrees higher than it is back home, but we probably wouldn’t be dressing for paddling outdoors if we were there and not here. Check back later for observations and images from our first day on the water here. 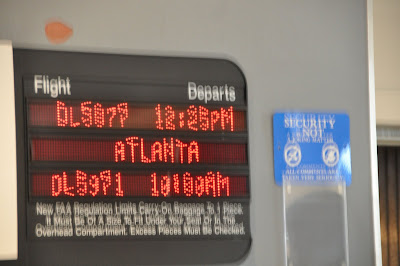 Signs of a bumpy time ahead? 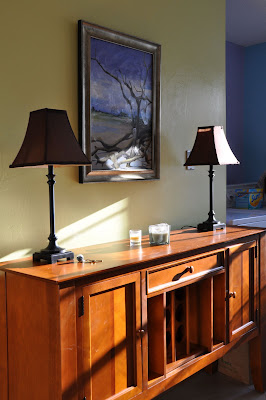 One of Marsha's paintings hangs in a well-lit spot. 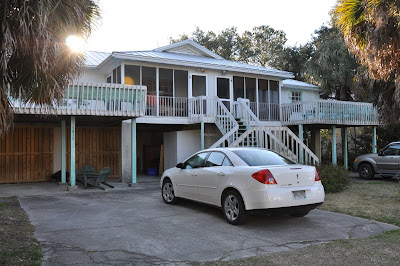 The apartment is on the left; Ronnie and Marsha live on the right.
Posted by bpfamily at 7:38 AM