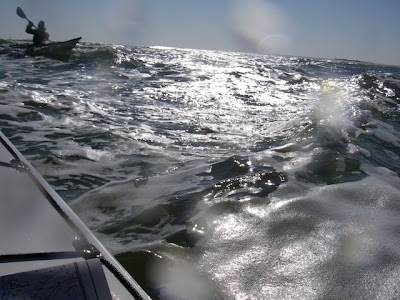 If you’ve ever checked the online weather forecast and then set out without an umbrella only to immediately get drenched, you would appreciate our first navigation lesson of the day: look around. We checked the Tide Log, so we knew that the high tide had been at 4:43 a.m. and the low would be at 11:25. We knew that the ebb tide would peak at 2.1 knots, so using the 50/90 rule, we figured that the current at 9:30 a.m. was about 90 percent of that. So when Ronnie told us to choose a bearing across Tybee Creek in order to reach a specific heading, we chose bearings well upriver.
It’s a testimony to our honesty that we continued on despite immediate feedback from the water that it wasn’t flowing at anything like the 1.9 knots we had estimated. It certainly didn’t look like it was, either, but we had chosen to let what we thought we knew overrule what our senses told us. Lesson learned.
Ronnie and Marsha excel at demystifying things. Next, they had us paddle backward in current and wind. We dutifully did, correcting as we went with long sweep strokes on one side. Ronnie stopped us to point out something obvious we hadn’t considered: the first half of a reverse sweep stroke propels more than it turns; the second half turns more than it propels. So in windy conditions, the best way to correct is to only use the second half of the reverse sweep stroke on the side to which you’re turning. We knew that, but we had never applied it.
The rest of the day was full of other demystifying moments like these., including a lunchtime navigation exercise about simple ways to locate yourself on a chart and navigate while on the water. 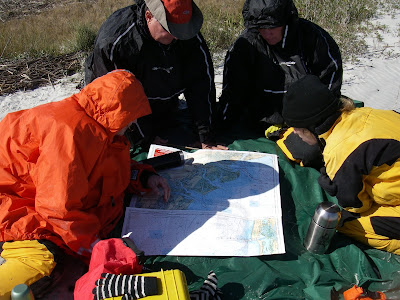 We also surfed a bit and marveled at how different ocean waves are from Lake Michigan waves. We got long rides on waves that had longer period and came in actual sets. And at one point, while paddling in the offshore swells, we were joined by four dolphins, who slowed down and stayed with us for several minutes. We also paddled through the marsh at high tide, where we saw oyster catchers and other shore birds. The sun was setting across Tybee Creek as we loaded our boats. It was day that satisfied all three of our goals. 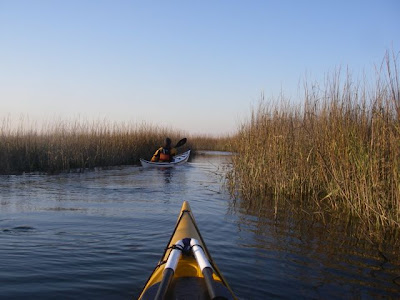