After several days of paddling for fun -- something that goes by the term "personal paddling" in our kayak logs -- we were scheduled to teach a Level 2 class yesterday at Geneva Kayak Center. The class began at 9 a.m. at the Big Rock Quarry in Sugar Grove, but we had to leave our house pretty early to drive to Geneva; hitch up the trailer; load the spray skirts, life jackets*, paddles, pumps and paddle floats; stop for more coffee; and get to the quarry before the students arrived. 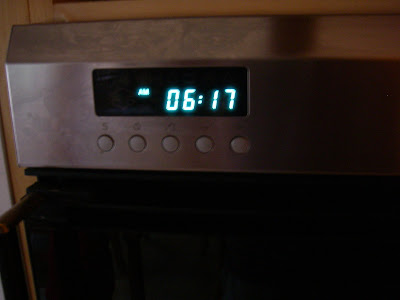 Time to get on the road. That's a.m., not p.m.
On the drive out, we reviewed our lesson plan, making a few modifications based on new ideas we'd been thinking and talking about. We wrote an outline on an index card and put it in a zip-lock baggie because we were too sleepy to keep more than one idea in our heads at a time, and right then, that idea was the need to drink more coffee. 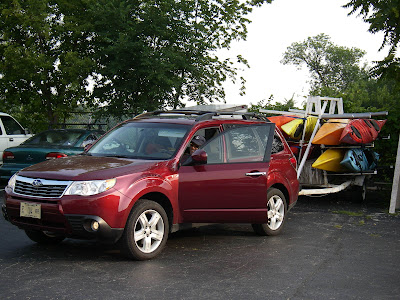 Boats and gear are loaded up, and we're ready to head for the quarry.

Shortly after we arrived at the quarry, our students began showing up. They were excited, and their mood was infectious. Before long, the five-hour night was forgotten and time began to fly. 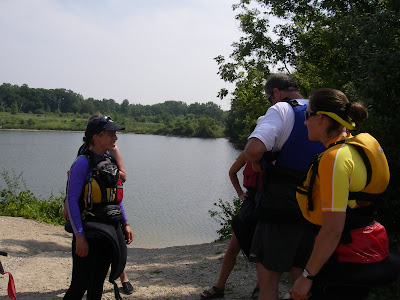 This is what makes it all worthwhile.

Six hours evaporated. We aren't even sure where they went. We worked on wet exits, strokes and rescues. We talked about safety and local paddling opportunities. And in the process, a group of strangers began to feel like a group of friends, and a group of beginners gained considerable skills. At the end, it was hard to say "good-bye," and many of them lingered, helping us strap down the boats and chatting.
Teaching is rewarding on many levels. Students force you to think about why and how you do the things that you do without thinking. They require you to figure out how they learn so you can effectively teach them. They remind you how far you've come as a paddler. And they reinforce your conviction that kayaking is a blast.

* Yes, we know. We wanted to write "PFDs," but we just got the following note from the American Canoe Association:
"USCG says 'Lifejackets'
"It has been clarified by the USCG that the use of the term
lifejackets is back and should be used when discussing the essential
piece of equipment all paddlers should have and should wear.
"The only time the term / acronym PFD is being used is when discussing
the types of lifejackets and/or regulation issues.
"It will be a challenge for many of use [sic] to change the terminology that
we use, but to keep with the winds of change we thought you should
know that the USCG will be using 'lifejackets' for general terms
and PFD for regulatory reference."
A challenge, indeed!
Posted by bpfamily at 1:43 PM