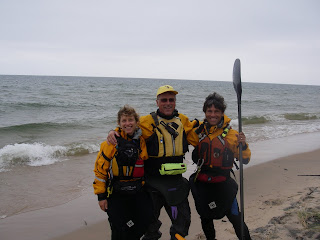 Sharon, Frits and Alec on the Lake Michigan beach where Frits keeps his boats and paddles almost daily, weather permitting.
We met Frits Kwant almost by accident at the West Michigan Coastal Kayakers Association symposium this year. We were, as usual, among the last to finish packing up and leave, and Frits was in no hurry because he lives only minutes away. When we mentioned that we would be visiting the area in early July, he graciously offered to reserve a campsite for us.
So of course we had to paddle together.
Frits has been paddling for 17 years. During that time, he has built four boats, numerous Greenland-style paddles, and a charming collection of maritime-themed plywood sculptures. Ten years ago, he retired from his job as a special education teacher in the Grand Rapids school system; a couple years ago, he and his wife, Clarice, remodeled their summer place near the lake into a year-round home, sold their house near the city, and became some of the few full-time residents of this glorious area.
Frits does not suffer from nature-deficit disorder. If he isn't on the lake, he's running along the country roads or watching the humming birds that frequent the many feeders that line his porch. A spry 67-year-old with a twinkle in his eye, he's open to adventure and has paddled some pretty challenging waters. He isn't interested in certifications and other external validations of his commitment to kayaking. He's simply a man who loves to paddle and has acquired the skills he needs to enjoy the sport safely.
We set off from the beach near Frits and Clarice's home and paddled north through choppy wind waves to Flower Creek, an almost hidden waterway that snakes past a few summer homes and then through marshland inhabited by muskrats, deer, turtles and innumerable birds. 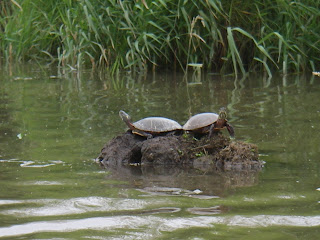 A few of the residents of Flower Creek. Moments later, they slipped into the water.

The unusually high water levels allowed us to paddle for what seemed like miles, though it was difficult to say how far we actually went through the twist and turns. It was peaceful and quiet, in contrast to the crashing waves on Lake Michigan. Frits appreciates both equally: the gentle creek and the challenging waves, the intimate view of one little area and the expansiveness of the big lake. And all the while, he shared with us stories of this place and the people who live here.
Kayakers always rely on local knowledge. It's how we learn when and where to paddle. It's how we avoid hazards and find out about the best a place has to offer, from surf waves to pie. Frits was our premier source of local knowledge this week. He shared his knowledge (and his time) freely, and we feel grateful. 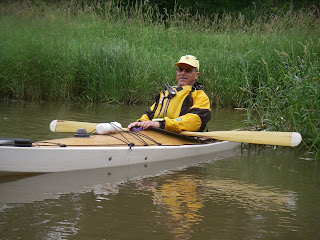 Frits in the third boat he built. (He made the paddle, too.)
Posted by bpfamily at 8:55 PM