Paddling in fog: a quieter experience on Lake Michigan

Warm air, cool water and still winds conspired to create fog along the shoreline on Thursday morning. The four-mile crib was invisible from Burnham Harbor. The only way to get there was to paddle a 67-degree course and wait for it to come into view.


Few sailboats bothered to venture out in such still conditions; motorboats and cruisers stayed in the harbor, too. We saw a couple of tour boats and heard communication on our VHF radios between them and the lock tender. Aside from that, we were alone on a very quiet lake.

We heard the fog horn long before we reached the crib. As we approached, we also heard the squawking and screeching of cormorants and gulls, who weren't pleased to share their prime fishing ground with us. 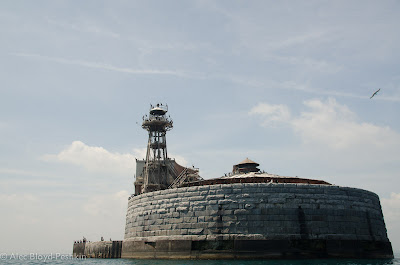 We weren't interested in fishing, though. We came to swim.


The fog gradually burned off, providing an interlude of blue skies before the cumulus clouds built above the city once again. By late afternoon, another in a series of summer storms came through, with strong winds and a deluge that contributed to the rising lake level (the optimistic way to view yet another storm that kept us off the water). In coming days, we'll post photos of some of the rougher water that followed.
Posted by bpfamily at 8:00 AM