We caught up with Keith Wikle, friend and fellow paddlesport blogger, as he was about to begin a three-day Essentials of Surf Kayaking Instructor Certification Workshop in Jacksonville, Florida with Instructor Trainer Nigel Law, co-owner of Savanna Canoe and Kayak. Nigel, who is well-known for surf kayak coaching at every level, is someone Keith has long admired and wished to work with. Snow and ice pelted our car as we spoke with Keith, who was taking a cab to a campground the night before the start of the ICW. 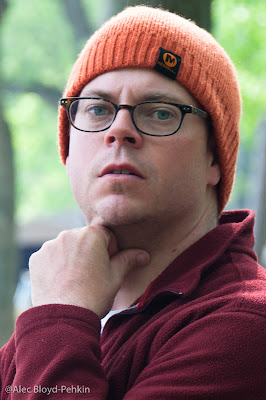 HKWT: Why are you doing a surf instructor certification?
KW: I really like surfing. It's the most dynamic part of the sport, and it's probably the thing I enjoy the most. I've spent a lot of time doing it.  I've had a number of people approach me about surf coaching, and I wanted to get a better idea about how to become a better instructor for surfing, especially for dedicated surf kayaks.

HKWT: How does this connect to sea kayaking and sea kayak coaching?
KW: All of the surf stuff I've learned has made me more aware of surf dynamics: what's safe and what isn't, what's fun, and how to take advantage of the dynamics of the surf zone in any boat. And if anything, it's made me less fearful of surfing in my sea kayak. For sea kayaks, you get a much better idea of whether this is going to be fun or it's going to be death on a stick.

HKWT: What are you expecting the certification process to be like?
KW: The initial part of it is surf zone safety and coaching in sit-on-tops. There's a big part of it that doesn't have anying to do with surf kayaking itself, but more has to do with making sure people are safe and learning rather than scaring the hell out of them.

And I'm just excited to go out and play on the waves in Florida in February!

HKWT: What do you expect to do with your new certification?
KW: I would like to run some courses on Lake Michigan, especially late summer and early fall, more sit-on-top than sit-in courses. Sit-on-top kayaks are a great way to get people involved in surf, making carves and performing turns without a combat roll. That's what I'm envisioning.

HKWT: Will you be writing this up on your blog?
KW: Yeah, I'm sure I will. 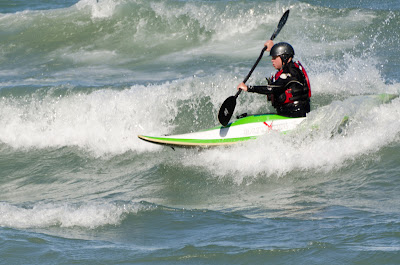