A new waterproof camera for paddlers? 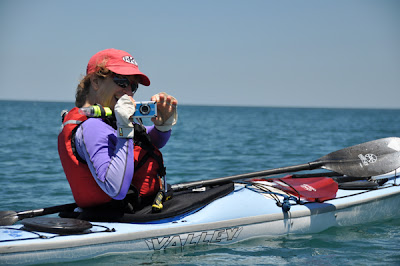 Paddlers always seem to be asking which waterproof camera to buy. That's a symptom of two problems: we aren't thrilled with the cameras we have, and they don't hold up as well as we wish.

Our main needs are high picture quality, video quality, water resistance and ruggedness. Shutter lag is a major drawback. So we were intrigued when Nikon announced last month the imminent release of a new point-and-shoot, waterproof digital camera, the Coolpix AW100. It's not out yet, but the specs look attractive for paddlers.

We're assuming that this camera is as waterproof as the others. It claims to be rugged enough to survive a five-foot drop; the recessed lens would certainly help if it face-planted when it fell, but a lens cover would have been a nice addition.

If this camera uses some of the same internal processing as other Nikon cameras, the picture quality should be as good as the specs suggest. (For the full specs, click here.) The video offers full HD as well as slow motion (at reduced resolution), which should be great for technique analysis and revisiting that great ender in the surf. Normal video is 30 frames per second (FPS); the Coolpix can capture video at 60, 120 and 240 FPS.

Shutter lag will still be an issue, but the burst mode allows you to capture three frames per second, giving you a better chance of catching the expression on someone's face when he successfully rolls up.

Since the camera isn't out yet, we can't talk to anyone who has tried it and can attest to its performance, but check out Digital Photography Review for an in-depth assessment of the information available. The comments at the end extend the discussion and provide additional information.

Bottom line: This camera lists at $379, making it the most expensive point-and-shoot, waterproof digital camera. (DPR recently reviewed them here.) Our Pentax Optio W80s are still functioning after two years, in spite of our griping, but if we had to replace one of them, we'd be tempted to try out this new Coolpix.

If anyone gets one and has a chance to try it out, please let us know what you think.
Posted by bpfamily at 5:32 PM

I think one of the new key features with this model is the built in GPS system that will geotag exactly where the photo was taken.

That's a great feature for extended trips where you don't remember the exact location of that campsite.

I had a previous version of the Olympus, which has a nice feature of an outer shutter that closes over the lens and squeegees it. Mine broke after three years which was disappointing, but I liked it well enough to replace it with a new Tough. Added advantage: I now have a compatible spare battery. -Bill B.