In search of the perfect paddling shoe

Lately we've enjoyed walking into paddle shops and expos and saying, "Wow! We don't really need anything." Then we browse anyway, admiring new versions of familiar items and assorted new items that we kind of want but don't really need.
Inevitably, we find something that tips the balance from want to need. Both of us have been frustrated lately with our paddling shoes. Alec goes through a pair of NRS Desperado Shoes at least once a year; Sharon loves her Wavesport Neobooties for their low profile and wide toe bed, but their soles aren't grippy and they appear to be discontinued.
This year at the Great Lakes Sea Kayak Symposium, we found a new paddling shoe we both like: the NRS Sasquatch Water Shoe. It has a grippier and thicker sole than the Neobooties (though not as grippy or stiff as the Desperado Shoes), some heel and ankle protection (though not a lot of support in the sole), and a wide toe bed. It's low profile, and the neoprene cuff keeps sand and pebbles out. 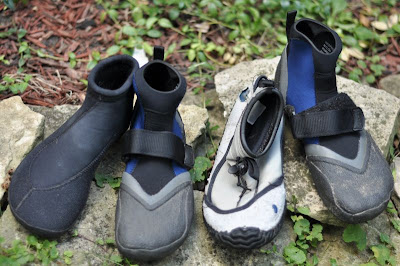 Sharon's Neobootie next to her Sasquatch; Alec's Desperado Shoe next to his Sasquatch. 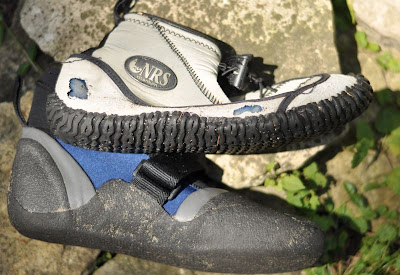 Alec's Desperado Shoe is faded and worn out above the heel and below the ankle, where it rubs on his boat. The Sasquatch looks sturdier in that area. 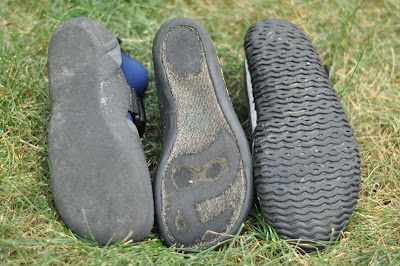 The Sasquatch (left) has a thicker sole than the Neobootie (center), but thinner than the Desperado Shoe (right).
We've only worn them for one weekend, so we'll see how well they hold up and whether the soles offer enough protection on rough and jagged surfaces. But they're comfortable, and we're both optimistic.

Nice selection of low profile neo booties.
Interesting that some wear out rather fast...
Around my paddling area the climate is much warmer and neo usually gets a bit hot and funky.
I prefer the water shoe type that allows the foot to breathe, however they are more bulky and don't fit in small boats.
More details at: http://gnarlydognews.blogspot.com/2010/06/gear-paddling-shoes-review.html

What a fantastic round-up you wrote! The problem I have with many of those lower shoes is they cut into the back of my ankle. So far, the Sasquatch is the most comfortable shoe I've worn, but it is warm.
Sharon