Yesterday was warm--very warm. The air temperature topped out at 76 degrees. Yesterday was also windy--very windy. The peak gust measured at the Harrison Street crib was 50 knots.

Yesterday, in other words, was an interesting day to paddle on Lake Michigan. 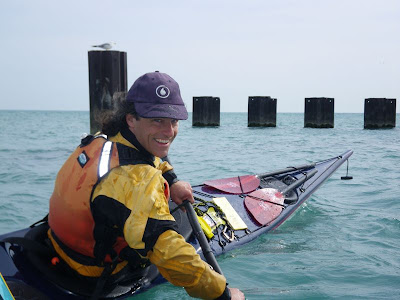 Alec looks back before paddling past the "dolphins."
Yes, that's what those pilings are called!
The water off North Avenue Beach was calm because of a jetty and the shape of the land, and the stretch south to Navy Pier was similarly protected (meaning the wave height didn't correlate with the wind speed). The water was bumpy, and we could see gusts on the water before they hit us. It was one of those days when you put into practice what you've read about paddling into the wind. If your casual sightseeing speed is about 3 knots but the wind is reducing that to 1.5 knots, then cranking up your effort to a 4.5-knot pace will effectively cut in half the time it takes to get to your destination. Talk about a good trade-off.
After we passed Navy Pier, such thoughts blew off with Alec's hat and all we could think about was, "Is this such a good idea?" That's when the wind reached its peak speeds. The water was cold (38 to 40 degrees), there was lots of clapotis, and a quick check over our shoulders confirmed that we weren't making much progress. Fortunately, we had options, and the one we chose was turning around and returning to the lee of Navy Pier.
We checked out the Chicago Fire Department boat, which was built in the 1940s and still boasts on its side in bright yellow letters, "We're there when you need us." Barry, who was on duty that day, was out enjoying the weather and appreciating a job that apparently consists of long periods of calm punctuated by moments of absolute urgency. 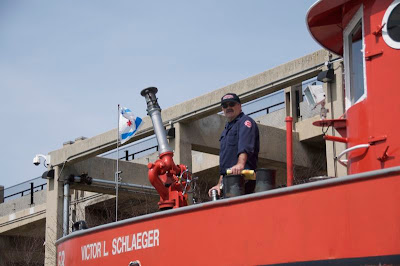 Barry, with beverage and books, gently informed us that we were paddling in a restricted area.
Then we flew back to North Avenue with the wind at our backs.
Posted by bpfamily at 7:21 PM

Glad you got a chance to enjoy the winds!

Is this fair, though: last time I paddled in the restricted area it ended up in two court appearances, charge of disorderly conduct and a $100 fine reduced to $70! You seem to have scored a 'beverage'...

We certainly wouldn't want to encourage bad behaviour on the part of the paddling community.
Disorderly conduct? Was that a misplaced bow rudder, or were you trying to pretend to be flotsum by doing a static brace?
Alec

Most likely it was my companion who was ticketed for 'excessive speed and wake.' One word: brand new Cetus!