Taking advantage of a wavy day 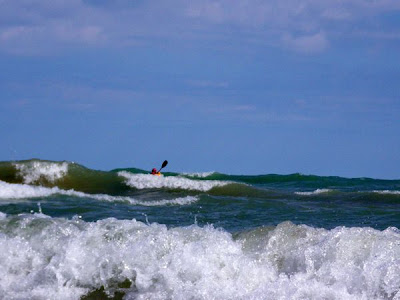 Mariners and coastal dwellers consider nor'easters trouble. Paddlers on the southwest shore of Lake Michigan consider them a gift.
The forecast for today was NE winds 15 to 25 miles per hour and waves 4 to 6 feet building to 5 to 7. That's the kind of geeky weather detail that lights up the message boards and clogs up bandwith on Chicago paddlers' iPhones.
So yeah, we went down to the doggie beach/water trail launch site at Montrose. The waves were big, frequent and chaotic. But the water was still warm and friendly, so in addition to playing in the waves, we took the opportunity to practice swimming our boats in to shore.
We knew (or believed) a few things going into this: That boats travel more slowly upside-down than right-side-up, that you always stay upwave of your boat, that it's best to hold the end toggle and avoid putting a finger inside the loop, that anything loose would soon be gone, that breaking waves would cause the boat to lurch.
Some observations:
- Even though Alec was prepared for the boat to lurch in larger breaking waves, one wave managed to tug it out of his grip. It tumbled upright and waited for him and he was able to catch up with it.
- Sharon found it best to swim off to the side behind the boat so that she wasn't hit in the face or thrown on top of it by a breaking wave.
- Alec found that holding the paddle was easier if he kept it below the surface of the water.
Both of us were surprised by our lack of desire to come out of our boats in breaking waves. It seemed to go against everything we've worked on--the ability to stay in our boats and in control, particularly in challenging conditions.
But that's exactly why we did it, so that if it happens in the future unintentionally, we'll have some experience to fall back on. 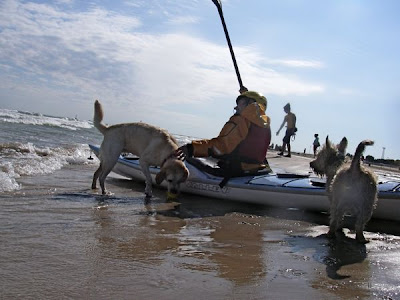 Hey there! I was out walking along the lake yesterday, including near Montrose, enjoying the giant waves even from land. Wish I'd known you were out there, too.