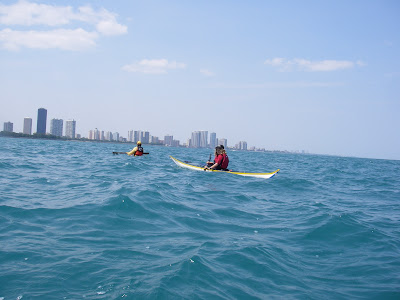 A photo from Montrose Beach on a calmer day. We weren't able to take any photos during the surf session.

Last Saturday, Tom Bamonte, the overachieving president of CASKA (Chicago Area Sea Kayakers Association), organized a club teach-in at Rainbow Beach on Chicago's South Side. Five instructors and about a dozen students showed up at 7 a.m., open to whatever the day might bring.
As it turns out, the day brought wind and waves--impressive ones. Two- to four-footers, depending on whether you partially hid in the lee of a breakwater or took your chances exposed to the full fetch of the lake. Either way, it was a day to learn to surf, to practice landing under control, and to try out rescues and rolls in "conditions" (i.e. waves).
Something we learned the hard way a few years ago: Don't let anybody on the water in surf conditions without a traffic pattern. Since we were dealing with less experienced paddlers, we also reviewed the rules of padding in surf: Anyone on a wave has the right-of-way, anyone down-wave has right-of-way over anyone further out, and if you're on a collision course, flip!
Out we went. The first thing we discovered was that we had two groups: those ready to brave the waves, and those who were terrified. Alec and Jim Tibensky took the braver souls; Tom Hieneman, Tom Bamonte and Sharon took on the sensible ones.
What fascinated me (Sharon) was watching the beginners discover that they didn't know how to brace after all. Sure, they had slapped the water with the backs of their paddles in various classes, but they had never truly needed a low brace, and now that they did, it didn't work. Over they went. Over and over. We quickly ducked behind the breakwater for a refresher course on bracing.
To me, this illustrates the limitations of learning and practicing braces and support strokes on calm water. It's like a fire drill--useful for rehearsing, but a pale approximation of the clearheadedness and technique you'll need for the real thing. An hour or so in the surf proved more productive than days in class, and far more tiring. By 11 a.m., everyone was exhausted.
The other group headed out to practice rescues beyond the surf zone. Again, these are skills we nearly always teach in calm waters, reassuring students that they work well in conditions, too. In wind and waves, students discover why it's so essential to maintain contact with the boat and paddler, and why excess gear on the deck is undesirable. All the students succeeded in their rescues, but they got some real-world experience in why it's important to pay attention to the details when executing rescues. (As Leon Somme, says, "Perfect practice makes perfect." Or at least, that's what we think he says!)
Joining CASKA costs $12.50 a year. For that, you get discounts at local paddle shops that quickly surpass the cost of membership. You also get friends to paddle with, the wisdom of the crowd, and sometimes, four hours of free instruction.
If you're a Chicago-area paddler, consider this your invitation to join CASKA. If you're elsewhere, check out your local club. There's no better deal in town.
Posted by bpfamily at 7:46 PM