We've long been fans of Snapdragon spray skirts. We still have our first skirts from years ago; they show their age, but still work well. Since then, we've purchased more Snapdragon skirts as our various boats with their many cockpit sizes have called for new ones.

So when we had a one-day layover in Seattle, we decided to visit Richard Wilson, the founder and owner of  Snapdragon Design, at Snapdragon World Headquarters.

OK, so it's a small shop in an industrial strip mall, where five long-time employees and Richard himself produce about 5,000 to 8,000 skirts per year. The air smells like adhesive and neoprene, and the shelves are chock-a-block with the raw materials. This is hands-on, small-scale manufacturing of the most earnest and endearing sort. "We're the small guys," he says.

Richard began sewing skirts in the 1980s, when he got into paddling and couldn't find a skirt he liked. He's still at it, making skirts for whitewater and sea kayaks as well as new products for recreational boats. He also makes neoprene hatch covers and poagies. But the economy has taken a toll. Boat sales are down, and with them sales of spray skirts. The booming part of the paddling world--Stand-Up Paddling (SUP)--doesn't require any neoprene. That's been tough. "Right now, it's about survival," he says. That plus a commitment to avoid laying off any of his employees.

But look around the shop, and it's just exciting. Richard is willing to make a custom skirt for just about any specific purpose. On one table, a couple of splash jackets are being retrofitted for integral spray skirts. On another, kevlar decks await their tubes. He's also recently come out with a sun deck for warm-water paddlers who just want sun and splash protection, and a breathable fabric skirt--both with pockets. "We're always building stuff," he says. 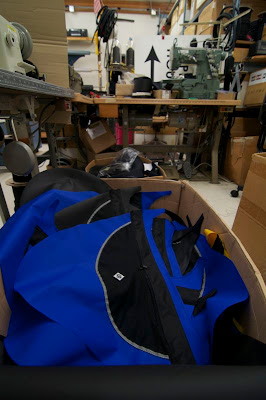 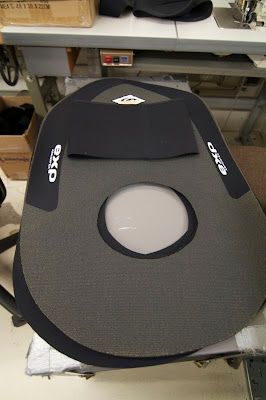 Richard is a living piece of paddling history in the Pacific Northwest. He has watched the business boom, from the 1970s, when he and his friends had to make their own boats, through the 1990s, when paddlesports were flourishing and business was booming, through today's contraction. He's still in business because he believes in quality and customer service. "We do everything here in our shop and we stand behind it," he says. "If there's ever issues we can deal with it, and we use the best possible materials."

Visiting Richard reminded us of what a small world kayaking is, and how the businesses that supply it frequently are owned by people who have long been a part of the community. We would buy Snapdragon skirts even if we didn't know that doing so supported a small business committed to the sport. But knowing that makes us even more happy about closing that circle.

Awesome, what a cool visit!

It is really interesting how few people make so much stuff we use on the water!

I agree with Keith! Say, will they make a tuilik or aquilisak? I have no desire to muck up a scratch DIY project with neoprene and Aquaseal.

How special! Thanks for writing this up and illustrating.

I just got my first Snapdragon skirt last week. I'll never get anything else.